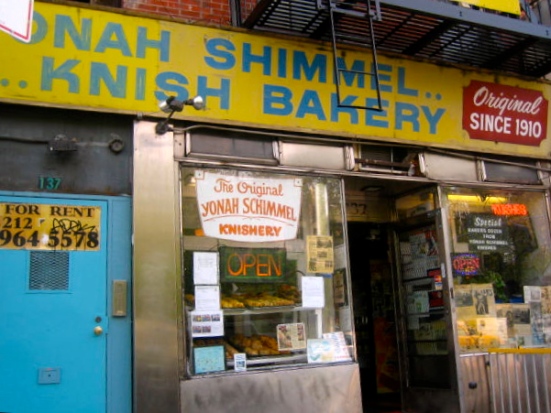 Yonah’s is a classic New York establishment if there ever was one.  And for $3.50 their Knishs are a tasty, filling bargain.

As the story goes, Yonah Schimmel, a Romanian immigrant, started selling potato knishs in the Lower East Side from a push cart in 1890.  20 years on, as the business grew, his cousin took over the business and moved it to its current location at 137 E Houston Street.  The bakery has remained in the family ever since and is now run by Yonah’s great nephew Alex Wolfman and his daughter.

The little bakery, an endearing relic of the neighborhood’s past, has been selling the same original recipe of baked potato knishs – a thin, round pastry filled with potatoes, buckwheat, and onion – for over 100 years.  They have since added cheese and onion, spinach, bluberry and a few other varieties and sell other classic Jewish dishes like bagels and borscht as well.

There are a few small tables inside if you want to have your knish to stay and they also fill small and large take out orders and ship their knishs out of state.  You can order by phone : (212) 477-2858 and they are open 7 days a week.